Airbus is intending to achieve break-even on its twin-aisle programmes at the reduce rate of production, while it acknowledges that a shift in demand mix puts increased pressure on its loss-making A220 lines.

“We want to get to [widebody] break-even, even at the current rate,” said Airbus chief financial officer Dominik Asam, speaking during a full-year briefing on 18 February.

He says the airframer’s restructuring efforts are “pushing us a long way towards that goal” and that the twin-aisle programmes should be “break-even or better” in the “not-too-distant future”.

Airbus chief executive Guillaume Faury believes widebody production – while lagging single-aisle recovery – might experience a “steep ramp-up when it comes”, because intercontinental demand will return and several airlines have retired long-haul aircraft as a consequence of the air transport crisis.

While Faury admits the company is “on the back foot” regarding A330neo output, he attributes this to the re-engined twinjet’s being at the beginning of its ramp-up phase when the crisis emerged.

He points out that rival Boeing has opted to take combined 777 and 777X production down to two aircraft per month, and believes there is no need, for the time being, to reduce Airbus’s twin-aisle output further. 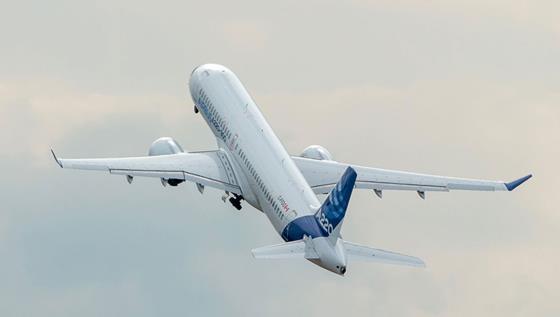 Airbus is gradually raising production rates for the A220

Asam says the company has seen a “shift away” from twin-aisles which had “good production margins” and a move towards the A220 which is still loss-making.

“There a lower contribution margin from widebodies and none from the A220,” he states.

Airbus last year pushed back its estimated break-even point for the programme to the mid-2020s, as it acquired a larger share of Airbus Canada Limited Partnership, the A220’s manufacturer.

Asam had said, at the time, that break-even required a “decent fill-rate” from both the Montreal Mirabel and the Mobile assembly lines.

Monthly production of the A220 will rise to five aircraft at the end of the first quarter of this year. The backlog for the type, at the end of January, stood at 484.

Asam says there is a “drive to cut costs” and that the break-even point is about 150 aircraft – although he says the company believes it can bring this “down a bit” by the mid-decade.

Airbus is already planning a slight production rise for its main single-aisle programme, the A320-family, increasing monthly output to 45 before the end of this year.

Faury stresses that the production system, which had been manufacturing A320s and A320neos at higher rates, “still exists” – which means single-aisle ramp-up to pre-crisis levels can be achieved more quickly than during the original industrial step-up.