China’s enigmatic J-20 powers up for its second decade

Ten years after its maiden flight, the Chengdu J-20 remains the world’s most enigmatic fighter.

Ten years after its maiden flight, the Chengdu J-20 remains the world’s most enigmatic fighter.

On 11 January 2011, then-US defence secretary Robert Gates sat down with former Chinese premier Hu Jintao in Beijing to discuss ways to improve defence ties. Just hours before, images of the maiden flight of the J-20 had flooded China’s internet. 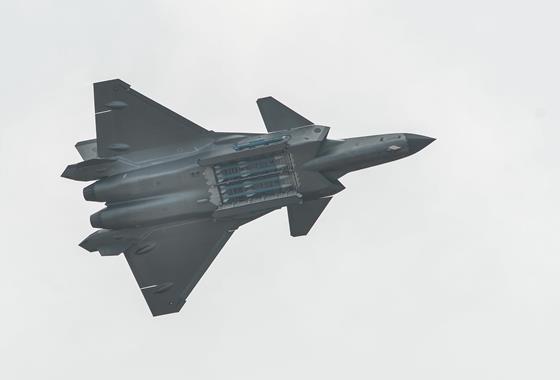 The Chengdu J-20 can carrier four PL-15 long-range air-to-air missiles in its main weapons bay, in addition to a pair of infrared-homing PL-10s in its side weapons bays

“This is about as big a ‘f*** you’ as you can get,” an aide told Gates, according to the former defence secretary’s memoir.

Gates’s team considered calling the high level meeting off altogether. Instead, he asked Hu directly about the test. The Chinese civilians in the room seemed shocked by the query. Apparently they were unaware of the milestone.

After several minutes of discussion in Mandarin among the Chinese delegation, Hu finally told Gates that the roll-out had been a “previously scheduled scientific test”. Gates, for his part, believed the People’s Liberation Army (PLA) would have given him a different explanation.

In this dramatic fashion the J-20 entered the fighter world’s central stage, where it has remained over the last decade. Aviation experts and amateurs alike pore over every photo that emerges of the iconic, twin-tailed type, noting fuselage numbers, design tweaks, and most importantly the J-20’s all-important engines. No other fighter has garnered the same aura of mystery. By comparison, the successes and failures of the Lockheed Martin F-35 are an open book.

In those early days of the J-20, what intelligence there was came from aviation enthusiasts near the Chengdu airfield where the type is produced. Video and photographs of matt black J-20s were frequently posted on China’s internet. Over the years, however, the steady stream of imagery and video from Chengdu has fallen off. This potentially relates to a tighter security environment in China in the era of Xi Jinping. Still, there are plenty of sightings from air bases around China and in satellite photos. The J-20 has also made some public appearances.

The first such appearance occurred in November 2016, when a pair of People’s Liberation Army Air Force (PLAAF) J-20s conducted a brief flypast at the opening ceremony of Airshow China in Zhuhai. Their fleeting appearance was a major sensation, but in the vast AVIC display inside the show, there was not an image or model of the J-20 to be found. When asked about the J-20, AVIC officials, never prone to sharing much detail, frowned and looked away uncomfortably.

Two years later, four J-20s participated in the flying display. While the performance highlighted the type’s large size, there was a lack of aggressive manoeuvres, such as the falling leaf and tight vertical loops. At air shows, such manoeuvres are routine for the fighter to which, rightly or wrongly, the J-20 is most often compared: the US Air Force’s Lockheed F-22. 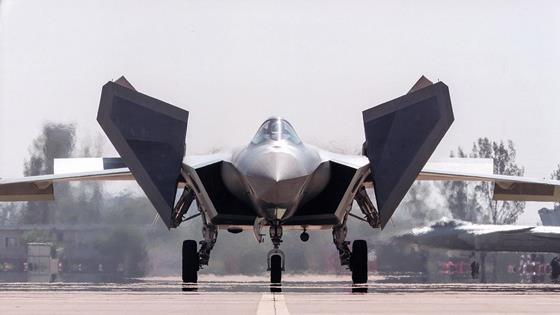 The 2018 Zhuhai show saw another first, with AVIC distributing a J-20 flyer with this brief description: “The J-20 developed independently by China is a heavy stealth fourth-generation fighter (aka fifth-generation internationally), renowned for its dominant role of medium and long-range air combat and excellent capability in ground and marine precision strike.”

But apart from the rare statement in China’s nationalist Global Times newspaper, there is little acknowledgment about the type.

“The combination of a large combat radius with long-range air-to-air missiles and low visibility should enable J-20s to prosecute [airborne early warning and control/intelligence, surveillance and reconnaissance (ISR)] aircraft, as well as tankers. Conceptually, the PLAAF talks about rolling back these high-value targets as being a major part of establishing air superiority. This is backed by semi-authoritative sources in AVIC, who suggest that J-20 is a platform that can ‘pierce the net’ for other aircraft.”

Supplemental mission sets include launching anti-radiation missiles and air-to-ground munitions at surface targets. The PLAAF believes stealthy aircraft are essential for prosecuting key nodes owing to the element of surprise. The last mission set Lee suggests is destroying other fighters in air-to-air engagements.

“The PLAAF does indeed like to tout the J-20’s manoeuvrability and air-to-air combat performance,” he says. “Given this, the PLAAF almost certainly will use the J-20 as an air superiority fighter against other fighters. But the PLA de-emphasises the importance of attrition warfare and instead advocates a ‘systems destruction’ approach. Killing individual adversary fighters (even in large numbers) is not as useful as killing [high value airborne assets] and key ground targets.”

That said, the J-20 fleet is still small. Andreas Rupprecht is an avid observer of Chinese military aviation, and author of Modern Chinese Warplanes, an authoritative guide to mainland airpower. According to Rupprecht, some estimates of J-20 strength put the overall number at 40-60 airframes, but he notes that only 20 examples have been confirmed.

Rupprecht highlights some of the frustrations in tracking the secretive J-20 programme. He points out that many observers believe prototypes and low-rate initial production (LRIP) examples powered by Russia’s Saturn AL-31FN engine should bear the simple J-20 designation, and later aircraft powered by the indigenous WS-10C Taihang should be designated J-20A. In their view, the J-20B designation should be reserved for J-20s powered with the advanced WS-15 Emei.

Based on photos of recent J-20s, he believes that since mid-2019 all factory-fresh examples use WS-10C engines, and that a WS-15-powered aircraft is in testing. He reckons that the WS-15 will take until 2025 to reach operational service, but that the WS-10C is nonetheless a major breakthrough in that it erodes Chinese dependence on Russian engines – sawtooth exhaust feathers distinguish the WS-10C from the Russian engine. As for the WS-15, estimates suggest that its maximum thrust will be 18.4t (180kN), potentially enabling ‘supercruise’, or the ability to fly at supersonic speed without maintaining the use of afterburners.

Even less is known about the J-20’s other key technologies. It is taken for granted that the type has an active electronically scanned array radar, but the capabilities of its distributed aperture system (DAS) are a matter of speculation. The F-35’s sensor fusion between radar, DAS and other systems offer excellent situational awareness and can inform external platforms through datalinks. Still, even for the USA this advanced fighter technology proved troublesome, highlighted by the infamous “shadowing” phenomenon, whereby one contact sensed by multiple F-35s appeared as multiple aircraft. If the F-35 programme proved anything, it was that ironing out such issues while ramping up production is no simple matter.

On the matter of stealth, Royal United Services Institute analyst Justin Bronk classifies the J-20 as a low-observable (LO) aircraft, while classifying the F-35 and F-22 as very-low-observable (VLO).

“The J-20A features forward canards which are not ideal from a VLO perspective, and initial batches have been powered by Russian AL-31 series engines without LO serrated nozzles,” Bronk wrote in a recent report. “These engines not only leave the design somewhat underpowered and likely unable to supercruise, but also increase the [radar cross section] when viewed from the rear, overhead or underneath.”

The J-20’s degree of stealth, however, is suitable for an aircraft operating near Chinese airspace with a great deal of background clutter, such as non-LO aircraft and considerable “noise” across the electromagnetic spectrum.

“The threat of J-20s with long-range PL-15 missiles operating within the background chaos would be a major headache for US planners attempting to protect critical tanker and ISR orbits within useful range of the area of operations,” he writes.

The J-20 has four weapons bays. Two small bays on the sides of the engine intakes can accommodate short-range air-to-air missiles, namely the PL-10, which can engage off-boresight targets. The two larger bays beneath the fuselage have been photographed carrying a total of four long-range air-to-air missiles. As Bronk states, the active radar-guided PL-15 is of particular concern, given its estimated range of 134nm (250km). The J-20 also has four external hardpoints that can carry additional ordnance or fuel tanks. There is online speculation that the J-20 may also have a cannon.

Asked about possible weaknesses with the J-20, Lee identifies two. Given that Chinese aviation brigades provide organic support to their aircraft, any J-20s deploying to a remote base will need to travel with their own support elements.

“Given that other PLAAF fighters like the J-10 and [Shenyang] J-11 are far more prolific, they could probably get away with forward deploying a detachment to another airfield with J-10s and not need to bring maintenance personnel. The J-20s don’t currently have that luxury.”

Lee also notes that the PLA has itself acknowledged that its officers – especially older ones – are not capable of dealing with modern warfare. This means planners may not be able to fully appreciate the advanced capabilities offered by the J-20. He adds that while Beijing is trying to resolve this through more realistic exercises, “poor utilisation will eliminate any advantages [the J-20] may have.”

The J-20 enters its second decade as a powerful symbol of China’s military ambitions. While it is Beijing’s most visible fighter type, it is also subject to its obsession with secrecy. Nonetheless, the 2020s are likely to see the type come of age, with the improved WS-15 engine in addition to other capabilities. The aviation world will continue to watch the programme closely.