US Army researchers believe they have found a novel way to articulate the position of turbine blades in the hot section of jet engines. They say the innovation could significantly improve efficiency and power of jet engines – and also enable a new, wider range of performance needed for futuristic aircraft, perhaps even new types of supersonic vertical-take-off-and-landing aircraft.

US Army researchers believe they have found a novel way to articulate the position of turbine blades in the hot section of jet engines.

They say the innovation could significantly improve efficiency and power of jet engines – and also enable a new, wider range of performance needed for futuristic aircraft, perhaps even new types of supersonic vertical-take-off-and-landing (VTOL) aircraft. 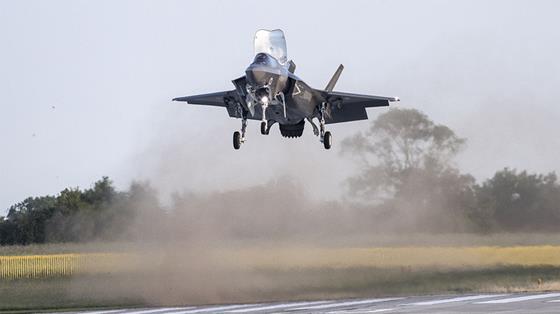 Jet turbine blades are typically fixed in one position. That geometry is chosen to enable the engine to perform most efficiently in one stage of flight, often cruise mode, which is the longest duration of flight. However, “this limitation creates drastic performance losses when operating away from the optimal design point, such as during take-off or landing, or when conducting sudden manoeuvring,” say US Army researchers.

To overcome this problem, researchers from US Army Combat Capabilities Development Command (DEVCOM) Army Research Laboratory, Iowa State University and Brown University used supercomputers to show in a simulation that by articulating turbine blades an engine could be optimised in all operating conditions.

Practically, that means a turboshaft engine, which is optimised for a helicopter’s forward flight, could be automatically self-adjusted to efficiently power a variety of manoeuvres such as taking off, landing or hovering. That would allow a helicopter to save fuel but also create extra power output for more aggressive flying. The researchers believe efficiency could be increased by 6.1% and shaft power could increase up to 49%.

While articulating compressor stator vanes in the cold section of jet engines has been done before, moving turbine blades in the hot section of the engine is novel, claims the US Army. In fact, it might have applications beyond helicopters, including military turbofan or turbojet-powered aircraft, civilian aircraft, as well as in turbine generators. Perhaps most intriguing, the technology might be useful for new types of supersonic VTOL aircraft, claim the researchers.

One of the most well-known examples of a supersonic VTOL aircraft is the Lockheed Martin F-35B. (Technically, the aircraft is only capable of short take-off and vertical landing, known also as STOVL). That aircraft uses a turboshaft-driven lift fan and a jet engine nozzle that can swivel 90 degrees for short take-offs and vertical landings. However, these STOVL manoeuvres typically only last about 15 seconds and burn a lot of fuel.

With articulating turbine blades an aircraft’s engine could be optimised for multiple modes of flight, including cruise, supersonic flight or hovering. That might allow a VTOL aircraft to hover for a long time, while later being able to adjust to supersonic flight.

Before futuristic applications like supersonic VTOL aircraft are tried, the US Army researchers are looking to perfect the basic self-adjusting turbine blade technology.

The researchers envision articulating turbine blades using “shape memory alloy torque tubes” that are activated by heat created via an electrical current. The use of shape memory alloys has been explored for a variety of aerospace applications, including variable size jet engine nozzles and wing-morphing concepts.

For the self-adjusting turbine blade technology, the US Army researchers envision “the shape memory alloy torque tube device housed inside [a] hollow cavity turbine disk [that] upon heating applies torque to articulate the turbine blades”. Pivoting the turbine blades would result in more efficiency within the turbine.

Simulating the effectiveness of changing blade pitch has only recently become possible due to increased computing power that has allowed more precise modelling, including of computational fluid dynamics, say the researchers. In particular, they credit the Department of Defense’s (DoD) High Performance Computing Modernization Programme, an effort which funds the development of supercomputers and high-speed networks for use by scientists and engineers.

“One of the key reasons we’re able to make such a rapid progress with this now is because of the recent advances in computing power that were not available 10 or 15 years ago, especially to the DoD community,” says Luis Bravo, aerospace engineer with DEVCOM Army Research Laboratory. “The speed and the power of computers have been increasing exponentially for the last decade. We are at a stage where we can routinely run very large simulations using thousands of computer processors and we can have these very precise simulations in a very short turnaround time.”

The US Army hopes to come up with a physical prototype in the next 12 months to help prove the findings of the computer simulations. “We envision the prototype to consist of a typical turbine stage with multiple stator and rotor blades along with the actuating control mechanism,” the service explains. “It will be experimentally demonstrated in a wind tunnel for system performance validation testing.”

The US Army believes adding the technology to a functional turboshaft engine could be done within three to five years, depending on OEM help and funding resources. Because turboshaft and jet turbine engines today are modular in nature, the researchers hope to be able to insert the self-adjusting turbine blade technology into existing power plants. They mention the GE Aviation T700 turboshaft, which powers the Boeing AH-64 Apache attack helicopter and Sikorsky UH-60 Black Hawk utility helicopter, as a hypothetical candidate.