The US Air Force successfully demonstrated the Rockwell B-1B bomber carrying and dropping an inert Joint Air-to-Surface Standoff Missile (JASSM) from an external pylon under the aircraft’s fuselage.

The US Air Force (USAF) successfully demonstrated the Rockwell B-1B bomber carrying and dropping an inert Joint Air-to-Surface Standoff Missile (JASSM) from an external pylon under the aircraft’s fuselage.

The test launch is a precursor to reopening more hard points on the belly of the B-1B that were welded shut in 2011 as part of New START, a nuclear arms reduction treaty between the USA and Russia. The USAF wants to use those fixtures to launch of conventional cruise missiles, including JASSM, the Long Range Anti-Ship Missile (LRASM) and hypersonic missiles. 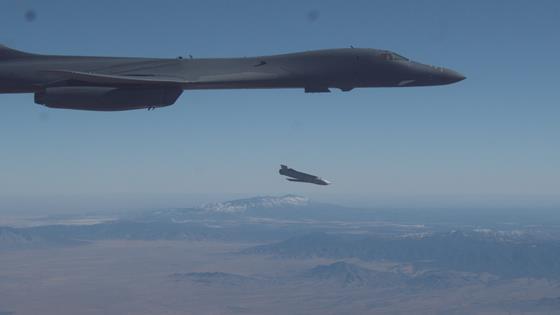 Though New START is set to expire in February 2021, “the return to use of external hard points would not violate the New START agreement”, says the USAF.

The 419th Flight Test Squadron demonstrated the cruise missile release at Holloman Air Force Base, New Mexico on 4 December, it says on 10 December. The external pylon that was tested usually carries the Lockheed Martin Sniper pod, an electro-optical targeting system.

“A targeting pod pylon was modified mechanically to allow for different connector configurations, and the internal wiring was replaced with harnesses that would support its new role,” says Keith Maynard, the special instrumentation flight chief of 812th Airborne Instrumentation Test Squadron.

It is not clear how many LRASSM or JASSMs could be carried by the B-1B with the external hard-points and its internal bomb bay. Previously, the USAF has said the bomber might be able to carry up to 40 weapons of an undisclosed type. 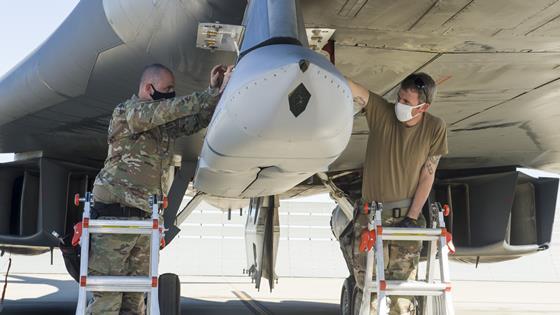 The stealthy JASSM and LRASM are seen as crucial weapons for an opening salvo against China or Russia. The weapons have a long range that would allow bombers such as B-1Bs and Boeing B-52Hs to stay outside the reach of enemy fire. Against China, for instance, the cruise missiles would likely be used to target surface-to-air missile sites on the mainland, or warships on the open ocean.