Launched from Wyndham airport in Western Australia, the Zephyr – a high-altitude, pseudo-satellite – was due to conduct test activities at 60,000-74,000ft on 28 September.

Around 1h after take-off, at 22:40, the aircraft (Z8B-03) climbed through 5,000ft and experienced an uncontrolled roll of about 15° to the right, says the Australian Transport Safety Bureau (ATSB) in its final report into the incident.

Although the movement changed its track by 180°, the aircraft was able to self-recover. Around 27min later, at 8,700ft, it experienced another uncontrolled roll of 14° to the right, and then 17° to the left.

“The aircraft again self-recovered, however, the turbulent conditions persisted. The UAV descended about 1,000ft over the next 7min, while the crew increased power and tried to direct the aircraft to calmer conditions,” says ATSB.

At 23:15 there was another uncommanded roll to the right, but during the recovery the Zephyr exceeded its maximum airspeed.

“The aircraft, with full left rudder applied, did not self-recover and the roll angle subsequently increased beyond limits. The UAV then entered an uncontrolled spiral descent. At about 23:16, the UAV’s airspeed increased further beyond maximum airspeed, which shortly thereafter, resulted in an in-flight break-up, with both wings fracturing at about mid-span,” says the ATSB.

This was only the second attempt to launch from the Wyndham site. In March 2019, another Zephyr crashed after departing from the same airfield, again owing to weather conditions.

Optimised for operating in the stratosphere, the Zephyr is an extremely delicate aircraft, with a 25m (82ft) wingspan but a mass of less than 75kg (170lb). 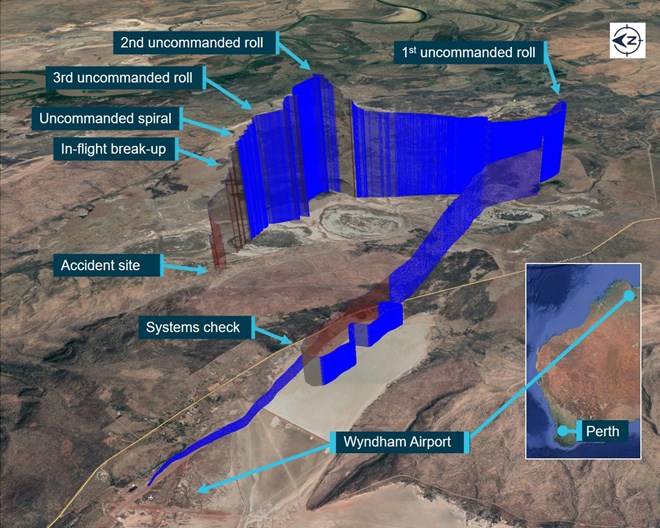 The flight path of the Zephyr on 28 September 2019

The ATSB cites an Airbus investigation into the crash that resulted in several recommendations. These include more accurate tools for forecasting local weather to improve mission planning.

Airbus heavily promoted Zephyr at the 2019 Avalon air show with a large model housed in a special pavilion.

The Australian Zephyr work was originally intended to focus on the aircraft’s ability to carry different payloads. Airbus sees both military and commercial applications for the type, which derives its power from solar panels during the day and batteries during the night.

Applications for the aircraft include intelligence, surveillance, and reconnaissance, as well as communications.