The university plans to research fuel chemistries and ignition-assistant technologies that would make engine ignition more reliable, the service says on 22 September. 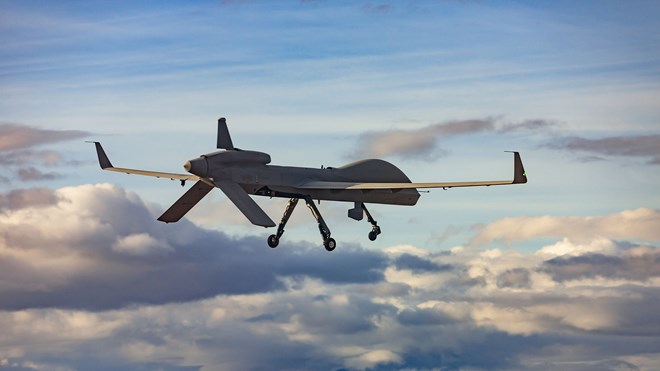 “The Army’s fleet of unmanned aircraft systems often experience performance and reliability issues due to fuel-property variations and their effects on the ignition,” says Mike Kweon, programme manager for the lab’s Versatile Tactical Power and Propulsion Essential Research Program.

General Atomics’ MQ-1C, which is the US Army’s largest UAV, is powered by a diesel engine. The US Army Research Laboratory notes that compression-ignition engines, a type that includes diesel engines, have trouble with low-quality fuels. A compression-ignition engine explodes fuel in its chambers by using pistons to compress air to the point of ignition, not via a spark plug as gasoline engines do.

“For compression-ignition engines, thermal energy generated by compression is insufficient when low-ignition-quality fuels are used especially at high altitudes and cold conditions,” the laboratory says. “To address this, University of Illinois-Urbana Champaign researchers will investigate the ignition chemistry of fuels using machine-learning algorithms, develop materials for novel ignition-assistant technologies for flexible-fuel UAVs, and investigate advanced propulsion technologies for high-speed air launch effects in collaboration with Army scientists and researchers.”

The ignition-assistant technology will be similar to a diesel engine’s glow-plug, said a research solicitation from the Small Business Innovation Research (SBIR) programme issued in December 2019.

“Historically, glow plugs have been used to assist ignition of diesel engines during cold start conditions by increasing the combustion chamber temperature before fuel injection,” says the SBIR solicitation. “However, existing glow plugs are not designed for long-duration-ignition assistance because of operating temperature limitations and energising-response times.”

The US Army says it is scheduled to start ignition-assistant technology research this fall, part of a larger development effort to create a portfolio of multi-fuel technologies. For instance, researchers announced in June an advanced scientific model that will allow vehicle maintenance specialists predict how bio-derived fuels might perform inside UAV engines.

“With this solution, the Army can reduce logistics costs associated with transporting and storing military fuel for military operations overseas,” says the US Army. “Instead, the Army can convert biomass, like wood logs, into usable fuel when and where it’s needed, or use any locally available fuels that have different specifications from the jet fuels in the United States.”