Two missiles were fired at a Boeing 737-800 over Tehran after a misaligned defence system, and a breakdown of communications and procedures, led the aircraft to be misidentified as a hostile intruder.

Evidence from Iranian investigators indicates that only the first missile hit the Ukraine International Airlines aircraft, although the Civil Aviation Organisation’s inquiry has yet to conclude firmly that the second missile – fired 30s after the first – missed the 737.

The inquiry has found that the “relocation” of a Tehran air defence unit resulted in a 107° misalignment of its threat-detection systems – a failure it attributes to “human error”. 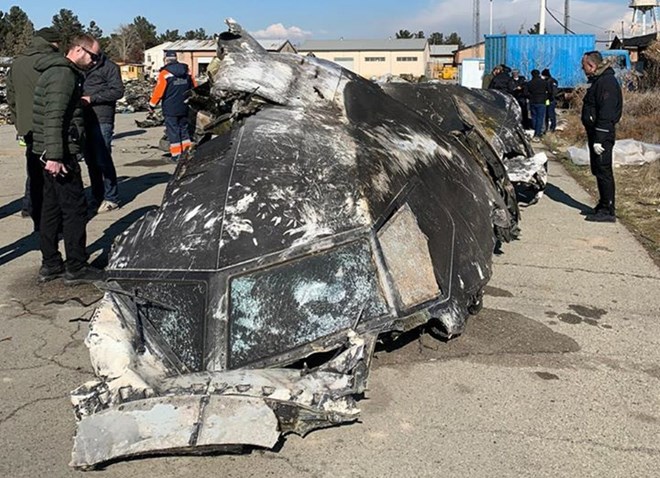 Two missiles were fired at the 737 about 30s apart

Iran’s air defence system had been placed on a higher alert level at around 04:00 on 8 January, and authorisation for commercial flights to depart was handed over to the defence sector. This was intended to avoid a potential misidentification of civil aircraft as military targets.

The crew of the 737, operating as flight PS752 from Tehran’s Imam Khomeini airport, requested start-up clearance at 05:51. Investigators had previously pointed out that the aircraft was scheduled to depart at 05:15, but was delayed to offload baggage.

Air traffic control sought clearance from the air defence co-ordination centre at 05:53, which was subsequently granted, and the aircraft was cleared for take-off just after 06:10.

The defence system’s operator attempted to transmit details of this potential target to the co-ordination centre.

“Recorded information indicates that [this] defence system notification was not communicated successfully,” says the inquiry. “The system operator began analysing the observable information and categorised the detected target as a threat.”

The inquiry says the misalignment error was exacerbated by the operator’s subsequent failure to identify the target as a passenger aircraft.

Without a response from the co-ordination centre, the defence system operator broke a crucial procedural requirement and ordered the firing of the first of two Tor M-1 missiles shortly before 06:15.

“Under the applicable procedures, if the defence system operator cannot establish communication with the co-ordination centre, and does not receive the fire command, they are not authorised to fire,” the investigators stress.

The inquiry candidly admits that this amounted to a “failure to follow the military command procedure”. 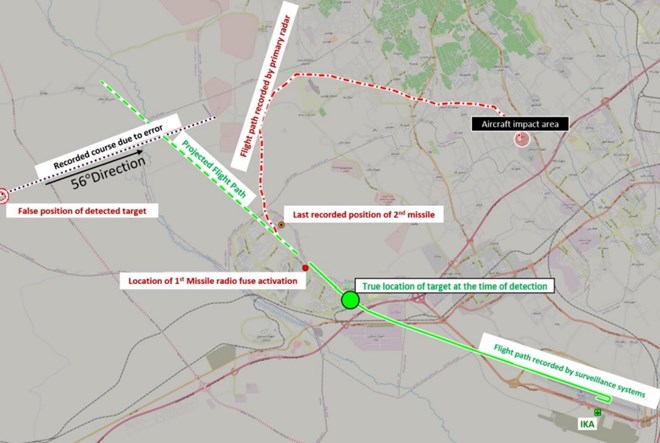 At 06:15 both the transponder and automatic dependent surveillance transmissions from the 737 were lost, but primary radar data shows the aircraft entered a wide right-hand turn after the initial missile strike.

The air defence system continued to track the target and, as a result of this continuity, the operator fired a second missile about 30s after the first.

But while this missile was tracked to a location close to the aircraft’s flightpath, the defence system indicated that the strike “had failed”.

The 737 was on fire but remained airborne for nearly 3min 30s after the first attack, flying a right-hand turn of around 180°, about 8nm in diameter, before it came down in Khalajabad, near the Shahedshahr area, some 10nm north of the airport, with no survivors among the 176 occupants.

“Effects produced by the explosives on the aircraft fuselage were analysed, and it was found that they have similarities to the expected ones of the detonation of the defence system warhead,” says the inquiry.

It says the “simultaneous” detonation and termination of aircraft transmissions indicate that the “most probable” scenario is that the jet was damaged by the first missile, rather than the second, but the inquiry states that final conclusions have yet to be reached.

Investigators also point out that the aircraft had been operating along a normal flightpath, and that “no condition” of flight PS752 has been identified connecting it to the error by the defence system.

“The sequence of events clearly shows the occurrence of a chain of events initiated by a human error,” the inquiry says.

“Up to this point, some important contributing links in the chain of events have been identified, which have led to targeting the aircraft mistakenly.”