Examination of flight data has allowed the Canadian government to piece together the helicopter’s last moments.

The Royal Canadian Air Force (RCAF) has lifted a grounding order on its Sikorsky CH-148 Cyclone maritime helicopter after ruling out a mechanical failure as the cause of a recent crash.

A Canadian CH-148 crashed into the Ionian Sea during good weather on 29 April killing all six personnel aboard. 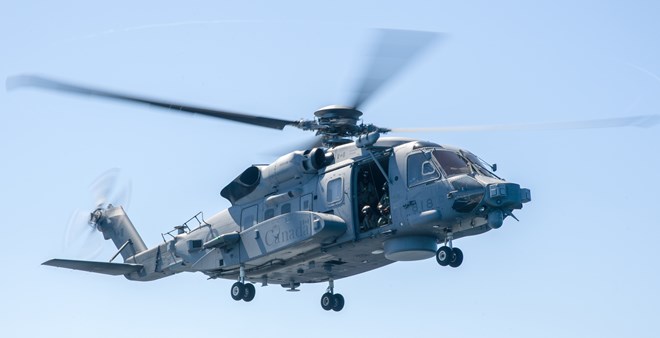 “While the Directorate of Flight Safety investigation continues, information that the investigation uncovered to date —primarily from the Cyclone’s flight data recorder — allowed the investigative team to replicate the conditions in the CH-148 Cyclone flight simulator and rule out any mechanical failure,” says Department of National Defence.

Examination of flight data has allowed the Canadian government to piece together the helicopter’s last moments.

“This revealed that the aircraft’s flight director was set to hold a specific altitude and airspeed. Thus, during the complex manoeuvering turn to align with the ship, the pilot’s inputs were significantly different from the autopilot settings and the aircraft did not respond in a way that the crew was expecting,” says National Defence. “The investigative team has confirmed that this rare anomaly only occurred under a very specific and narrow set of circumstances. The crew would have had no previous exposure or experience on how to handle this situation.”

In 2017, the RCAF fleet of CH-148 were grounded for two months after Sikorsky discovered a software issue with the helicopters’ flight control computers.

The CH-148 is a military derivative of the Sikorsky S-92, a twin-engined medium-lift helicopter that is used widely in the oil and gas industry.

The RCAF is set to receive 28 examples of the helicopter by 2021, according to Sikorsky. The helicopter is used mostly for anti-submarine warfare and anti-ship warfare, as well as maritime search and rescue, and overland utility missions