As part of a planned succession, he takes over the reins of the USA’s largest defence manufacturer from former CEO Marillyn Hewson, who now will become executive chairman of the board.

Jim Taiclet started as chief executive and president of Lockheed Martin on 15 June.

As part of a planned succession, he takes over the reins of the USA’s largest defence manufacturer from former CEO Marillyn Hewson, who now will become executive chairman of the board, the company says on 15 June. 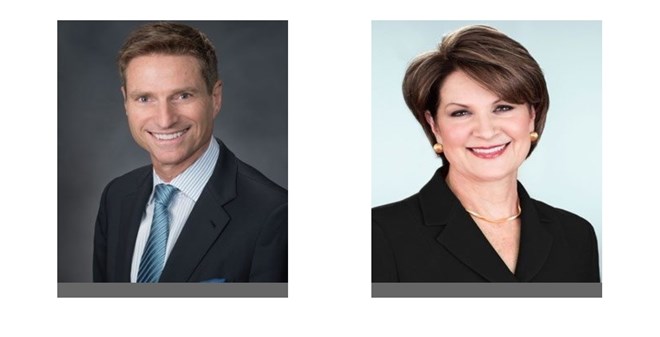 James Taiclet on the left and Marillyn Hewson on the right

The leadership change was announced in March 2020. Taiclet joined Lockheed Martin’s board in 2018 and will continue to serve as a member.

Taiclet’s work experience includes time in the telecommunications and aerospace industries, as well as a career as a pilot with the US Air Force.

To take over leadership of Lockheed Martin, he resigned as chairman, president and CEO of mobile phone broadcast tower company American Tower Corporation in March 2020. He led that company beginning in 2003.

Taiclet was president of Honeywell Aerospace Services prior to working at American Tower. Before that, he was vice-president of engine services at Pratt & Whitney.

Like all aerospace firms, Lockheed Martin is straining to maintain production amid coronavirus-induced social distancing restrictions and disruptions to its supply chain. The F-35 stealth fighter, the company’s biggest revenue generator, is expected to fall short of its 2020 production target of 141 examples by 18 to 24 units. The production reduction is blamed on smaller suppliers being unable to deliver parts on time amid pandemic disruptions.

The high cost of flying the F-35, about $44,000 per flight hour for the “A” variant, could also cut into future orders of the aircraft. Lockheed Martin has pledged to get the operating cost for the F-35A down to $25,000 per flight hour by 2025, but the US government has been skeptical.

In addition to the change at the top, Lockheed Martin is shuffling leadership in several business areas.