The flying-wing unmanned air vehicle is solar-powered and designed to stay aloft for six months.

The flying-wing unmanned air vehicle (UAV) is solar-powered and designed to stay aloft for six months. By flying in the stratosphere at about 65,000ft altitude, it is able to transmit cellular data over an area of about 3.1 million ha (7.8 million acres). The UAV is being pitched as an alternative to cellular towers or communications satellites. 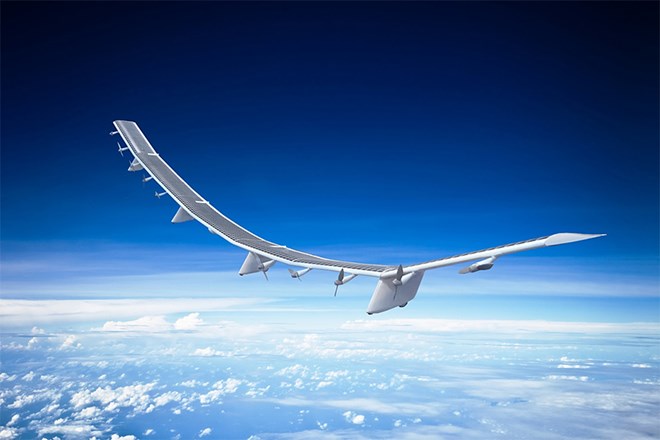 The aircraft made its inaugural flight in September 2020 at NASA Armstrong Flight Research Center in Southern California.

HAPSMobile is a startup that is majority-owned by telecommunications firm SoftBank of Japan and is minority-owned by UAV manufacturer AeroVironment of Southern California. AeroVironment builds the HAWK30 in Simi Valley, California. The company has built a number of long-endurance, solar-powered flying wings, including the Helios Prototype for NASA.

The New Mexico Economic Development Department is subsidising HAPSMobile’s presence at the Spaceport with $500,000. A lease was signed in March 2020, it says.

Located in southern New Mexico, Spaceport America is already home to Virgin Galactic, SpinLaunch, AeroVironment and Up Aerospace. It is an FAA-licensed rocket launch complex surrounded by 1.5 million ha of restricted airspace.

HAPSMobile had planned by 31 March 2020 to ship Hawk30 to the Hawaiian island of Lanai for further testing in the Pan-Pacific UAS Test Range Complex. It is not clear if the UAV was ever sent or if the firm still plans to flight test in Hawaii.

The company was building two examples of the HAWK30 prototype. It did not immediately respond to a request for comment.