The demonstrations, carried out with a mock weapon, come ahead of the fighter being certificated to carry the nuke, says Sandia National Laboratories.

A series of flight tests have shown that the B61-12 nuclear bomb is compatible with the Boeing F-15E Strike Eagle.

The demonstrations, carried out with a mock weapon, come ahead of the fighter being certificated to carry the nuke, says Sandia National Laboratories, says on 8 June. The laboratory is responsible for designing, engineering and integrating the munition’s components.

The F-15E is the first aircraft in the US Air Force (USAF) fleet to complete the series of flights, which are used to certificate the new -12 variant of the B61 nuclear weapon. 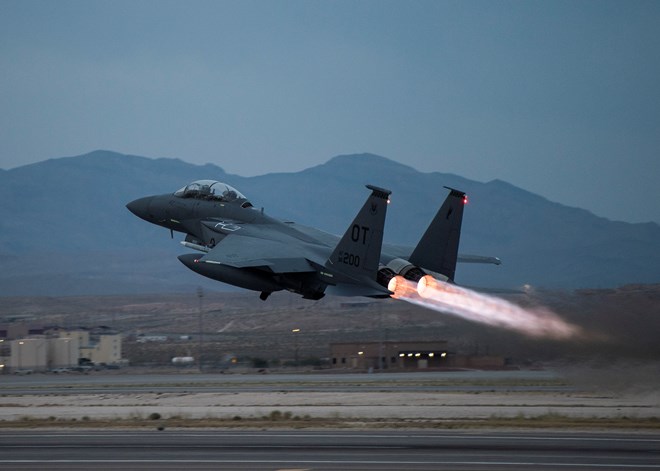 As part of a 20-year life extension programme, Sandia National Laboratories plans to build the B61-12 bomb with reused components from aging munitions and remanufactured parts, as well as newly designed technologies. The lab promises the B61-12 will also have greater accuracy due to a new tail kit.

The US Department of Energy’s National Nuclear Security Administration, which is in charge of Sandia National Laboratories, has said the first B61-12 will be manufactured in fiscal year 2022.

Sandia National Laboratories undertook two drop tests from Tonopah Test Range in Nevada in March 2020. During the first test on 12 March, an F-15E successfully released an inert B61-12 at about 1,000ft above ground level while flying near Mach 1. In the second test, an F-15E released the mock munition at higher than 25,000ft while flying near M1. In both demonstrations, the fake nuclear weapon hit the desert floor within its designated target area.

“Sandia National Laboratories and the Air Force conducted the full-weapon system demonstration under a full end-to-end test scenario, demonstrating operational crews, representative carriage, release conditions and weapon functionality,” says Steven Samuels, manager with Sandia’s B61-12 system’s team. “We were able to test the B61-12 through all operational phases, and we have extremely high confidence the B61-12 is compatible with the F-15E Strike Eagle.”

The first B61 entered service 50 years ago, but the F-15E, as well as other USAF aircraft, need to be flight tested and certificated on the -12 variant. The USAF is consolidating four B61 variants with the -12.

The nuclear bomb is about 3.7m (12ft) long and weighs about 374kg (825lb). It is designed to be air released in either ballistic or guided-gravity drop modes.