Bulgarian investigators have revealed that a Boeing MD-82 almost stalled while nose-high at low level, after the crew did not engage go-around thrust during a missed approach at Tarbes-Lourdes airport.

Bulgarian investigators have revealed that a Boeing MD-82 almost stalled while nose-high at low level, after the crew did not engage go-around thrust during a missed approach at Tarbes-Lourdes airport.

The Bulgarian Air Charter aircraft descended to about 40ft while still nearly 500m from the runway, flying close to the ground for over 800m before a go-around decision and nearly 1.7km before the engines powered up.

Such was the alarming attitude of the MD-82 that Tarbes air traffic controllers notified French investigators that they had watched the aircraft as it “flew over the entire runway” at abnormally high pitch and low speed, unable to climb, with its tail just 20m (65ft) from the ground.

The controllers’ notification compared the sight to that of the Air France Airbus A320 which failed to climb away and carved into a forest following a low pass at the 1988 Habsheim air show.

But the MD-82, it states, managed to start climbing at the end of the runway, flew “very close to a hill” and turned left, diverting to Toulouse.

Full details of the serious event could not be obtained because the aircraft’s captain did not report the incident immediately to airline management or ground personnel, which meant the cockpit-voice recorder data was not retrieved.

But the flight-data recorder captured the dynamics of the event as the aircraft (LZ-LDM) arrived from Catania on 16 July 2018.

Some 90s before arrival it had been fully configured and stable on the ILS glideslope for runway 20, according to the Bulgarian ministry of transport’s aircraft accidents investigation unit.

At about 470ft above ground the first officer, who was flying, disengaged the autopilot, leaving the autothrottle active with a speed setting of 140kt.

But he was unable to maintain the heading and glideslope because the aircraft was subjected to strong wind gusts and heavy rain. The jet started to deviate to the left and descend below the glidepath, prompting the captain to take control.

Despite the aircraft’s straying outside of the stable approach criteria, including falling “significantly under” the glidepath, the captain did not order a go-around.

The autothrottle was disengaged at 85ft above ground and at 59ft the captain raised the aircraft’s pitch from 4° to 11° – without increasing engine power.

It descended to around 40ft while still 480m from the runway threshold and flew horizontally at this height for 10s while its airspeed fell from 136kt to 128kt. The aircraft crossed the threshold, right of the centreline, and the “extremely concerned” first officer suggested a go-around, says the inquiry. 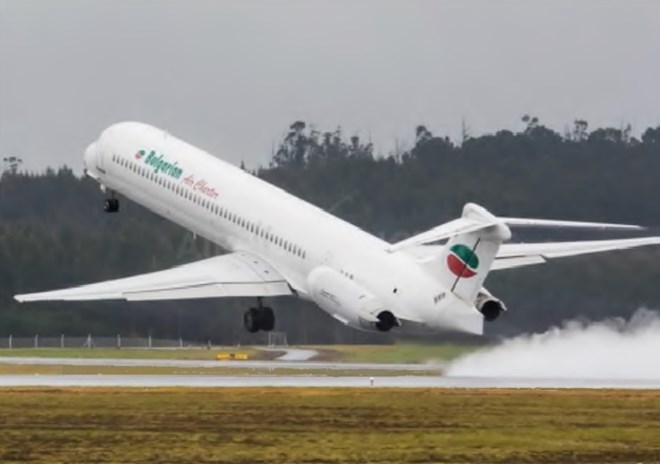 After the jet had travelled 350m, still at low height, along the runway, the captain ordered a go-around and increased the aircraft’s pitch, while the first officer retracted the flaps from 40° to 11°, raised the landing-gear, and selected an airspeed of 180kt.

But neither crew member realised that the thrust levers had been left close to idle and that, after the autothrottle had been disengaged, the jet operated for 29s without the thrust required for a go-around.

The airspeed bled away to just 116kt as the aircraft’ pitch increased to 15° – its lift hampered by the flap retraction – and only when the first officer was disarming the spoilers did he notice the thrust levers had not been advanced.

Flight-data recorder information shows the thrust levers were aggressively pushed forward as the aircraft was still laboring at 71ft and 119kt. Three seconds later the pitch reached its maximum of just under 20° while the aircraft’s angle of attack reached 38.6°.

The aircraft travelled 1.68km without sufficient thrust – close to critical angles of attack and stall speeds – at heights varying from 33-107ft before go-around power was applied.

Once the engine thrust increased, and the aircraft moved comfortably back into the flight envelope, the crew diverted to Toulouse. It touched down on Toulouse’s runway 32L about half an hour after the incident.

None of the 136 passengers and six crew members was injured.

But the captain “did not report what happened” to the airline’s management, or the maintenance staff, immediately after landing which meant the cockpit-voice recorder could not be downloaded and examined to clarify the situation on the flightdeck, says the inquiry.

Its analysis points out that the thrust levers had been left above the idle position before the autothrottle was disengaged, and that this was a reason that the flight “did not end fatally”.

Although the wing almost reached its limit in terms of generating lift, this limit was not passed, and the crew’s realisation “at the last moment” that the MD-82 did not have enough thrust meant an accident was averted.

But it states that the captain “did not operate the aircraft appropriately” while the first officer failed to monitor height, speed and engine parameters after the captain took over as the flying pilot.