An electric-powered Cessna 208B Grand Caravan lifted off a Moses Lake runway on 28 May, marking another milestone in a project that aims to bring all-electric flight to consumer air travel.

An electric-powered Cessna 208B Grand Caravan lifted off a Moses Lake runway on 28 May, marking another milestone in a project that aims to bring all-electric flight to consumer air travel.

In taking flight, the Caravan became, according to the companies behind the project, the largest all-electric passenger or cargo aircraft ever to fly. In flight! The maiden flight on 28 May 2020 of a Cessna Grand Caravan powered by an all-electric propulsion system, the Magnix Magni500, generating 750hp. The aircraft flew from Moses Lake, Washington.

Economically-feasible all-electric commercial flight has remained elusive for years, hamstrung largely by the relatively low energy density of batteries, which has constrained aircraft range and payload.

But the Grand Caravan that flew on 28 May received power not from a PT6A, but from Magnix’s Magni500, a 750hp all-electric propulsion system.

AeroTEC had performed the complex task of replacing the PT6A with the new electric system.

The “eCaravan” took off from Grant County International airport and circled the field for about 30min before landing. The test pilot described the maiden flight as “flawless”, Magnix chief executive Roei Ganzarski says. Ganzarski calls the flight “a real significant watershed moment for aviation”. 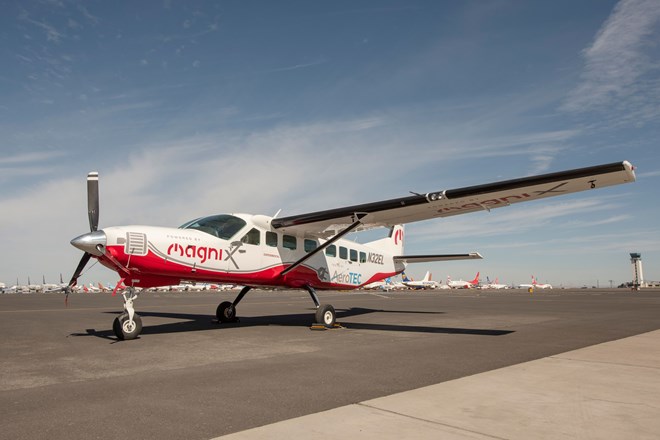 The Magni500-powered Cessna Grand Caravan on the ground on 28 May 2020, the day of its maiden flight, from Moses Lake.

Magnix, which has offices in Australia and Seattle, has been working on the Grand Caravan project alongside other electric-aircraft efforts. In December, Canadian commuter airline Harbour Air flew a Magni500-powered de Havilland DHC-2 Beaver. That airline and Magnix are working to have that configuration certificated.

Magnix has also been named one of two companies to supply propulsion systems for Alice, an all-electric, nine-passenger aircraft being developed by Israeli company Eviation Aircraft. That project hit a snag in January when an electric system fire damaged an Alice prototype in Arizona.

As configured, the Magni500-powered Grand Caravan can carry 4-5 passengers on flights up to 100 miles, taking into account the need for reserve power, says Ganzarski.

Magnix and AeroTEC are working on certificating that aircraft by the end of 2021. By then, Ganzarski predicts battery technology will have advanced to where the Grand Caravan will be able to operate 100-mile flights carrying a full load of nine passengers.

Magnix and AeroTEC are pitching Magni500-powered Caravans as perfect for operating routes less than 500 miles that connect cities within regions, says AeroTEC chief executive Lee Human. Decades ago, small airlines known as “commuters” operated such routes in the USA. Nearly all such carriers long since folded as the airline industry trended toward larger regional jets.

“There is a huge gap,” Human says, adding that no existing aircraft have the economics to make such routes feasible.

But electric propulsion systems burn no fuel and have fewer moving parts and less complexity than fuel-burning engines. That means they cost significantly less to operate – about half as much as internal combustion engines, says Ganzarski. The Magni500 consumed about $6 worth of electricity during the Grand Caravan’s 30min test flight, he adds.

The Magni500 on the Grand Caravan receives power from a 750V lithium-ion battery system weighing roughly one tonne, though Magnix is studying other technologies, including lithium-sulfur batteries and hydrogen fuel cells.

Ganzarski declines to disclose pricing or say how many Magnix-powered aircraft customers have ordered. “There is way more interest at this point than we anticipated,” he says.