Plasma blackout is not a worry for hypersonic missiles: Pentagon

The US Department of Defense is not concerned that its in-development hypersonic missiles could suffer from a communications blackout caused by a cocoon of plasma. Radioing the high-stakes weapons could be critical, for instance, to abort a mission.

The US Department of Defense (DoD) is not concerned that its in-development hypersonic missiles could suffer from a communications blackout caused by a cocoon of plasma.

NASA spacecraft and intercontinental ballistic missiles have previously suffered from a communication interference caused by a layer of plasma forming around the vehicles when they re-enter the Earth’s atmosphere. Plasma forms when atmospheric gases are ionized – electrons are separated from their atoms – by the heat and compression caused by an object moving through the air at many times the speed of sound. The plasma layer blocks radio transmissions. 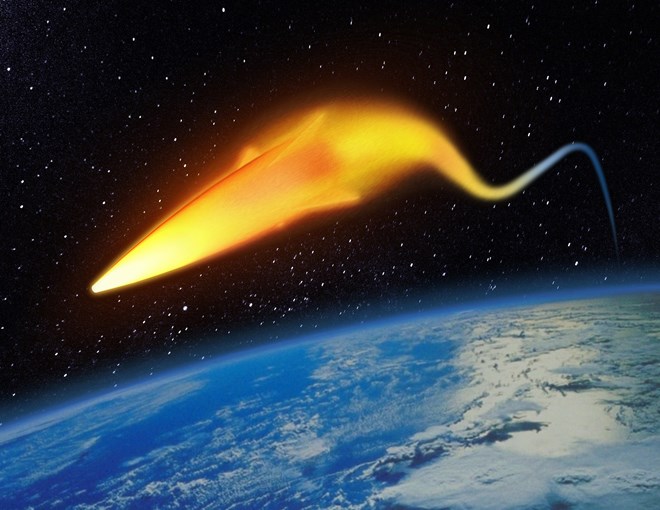 Many researchers and observers have thought that hypersonic missiles would also form a plasma sheath while flying more than five times the speed of sound through the atmosphere. That could make it difficult to communicate with the missiles. Radioing the high-stakes weapons could be critical, for instance, to abort a mission.

However, despite popular perception, the possibility is not a major concern, says Mike White, assistant director of hypersonics with the Pentagon.

“When we fly a missile for sustained hypersonic flight within the atmosphere, the plasma tends to not be so much of a problem,” he says. “We see plasma effects when we have relatively blunt bodies entering from space and the velocities they’re very, very high, and the shockwaves are very, very strong, so that heats the air even more severely than what we experienced in sustained flight.”

The boost-glide variety is essentially a hypersonic glider mounted on top of a ballistic missile or booster rocket. After it is rocketed to a high altitude, the vehicle is separated from the booster and glides back to Earth at speeds up to Mach 20. Examples include the US Army and US Navy’s jointly-developed Common Hypersonic Glide Body (C-HGB), as well as the US Air Force (USAF) and Defense Advanced Research Projects Agency’s (DARPA) jointly-developed Tactical Boost Glide weapon.

The high altitude and high speed that comes with boost-glide hypersonic missiles has often caused observers to worry the weapon would develop a plasma sheath.

Compared to the Space Shuttle or Apollo capsule, hypersonic boost-glide vehicles are designed to slip through the atmosphere without too much plasma build-up, however.

“We designed the vehicle to be relatively streamlined and slender, and relatively aerodynamically efficient,” says White.

The C-HGB, which was successfully test flown in 2011, 2017 and March 2020, has been able to communicate with ground stations, he says.

“All of our flight test vehicles had telemetry; measuring things on the vehicle and sending that information to ground stations that are put in place along the trajectory to monitor and take that data,” says White.