Airbus has marked the opening of a new A220 final assembly site in Mobile, Alabama, a move the airframer says doubles its manufacturing presence in the city.

Airbus has marked the opening of a new A220 final assembly site in Mobile, Alabama, a move the airframer says doubles its manufacturing presence in the city.

The manufacturer has been producing A220s in Mobile since mid-2019, but doing so in a hangar built for producing A320s, and in support hangars.

Meanwhile, the company constructed the new A220 site – a 25,100sq m (270,000sq ft) facility that houses five assembly stations. A220s will now be assembled in the new site, though they will visit other hangars for additional work prior to reaching the flight line, Airbus says. 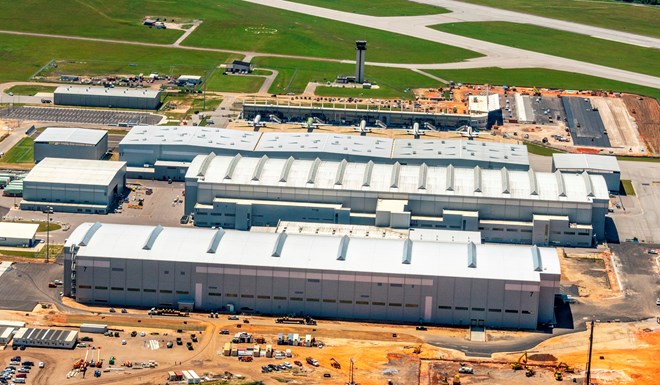 Airbus’s Mobile manufacturing facility, with the A220 assembly site in the foreground. The center structure is Airbus’s A321 final assembly hangar.

The A220’s road to Mobile started several years ago during a trade spate between Boeing and Bombardier. Boeing alleged Bombardier’s sale of the then-called-CSeries at bargain prices harmed US industry, and urged the US government to slap tariffs on CSeries imports.

Bombardier ultimately won the case, but not before Airbus stepped in, agreeing in 2017 to acquire CSeries from financially troubled Bombardier and to sidestep potential tariffs by opening a CSeries production line in Mobile, where Airbus already made A320s.

Airbus acquired majority ownership of CSeries in 2019, renamed it A220 and began producing A220s in Mobile in 2019, with the first aircraft destined for Delta Air Lines.

Airbus has now started work on the first Mobile-made A220 for another US customer, JetBlue Airways, the airframer says. JetBlue has orders for 70 A220s, according to Cirium fleets data. The first JetBlue A220 comes together at Airbus’s Mobile assembly site.