The US Navy (USN) has begun its search for a new jet trainer to replace its Boeing T-45 Goshawk fleet.

As part of its new Undergraduate Jet Training System programme, the service wants a nondevelopmental, land-based jet trainer aircraft capable of field carrier landing practice and nuclear aircraft carrier touch-and-go landings by 2028 or sooner, according to a request for information posted online on 14 May. 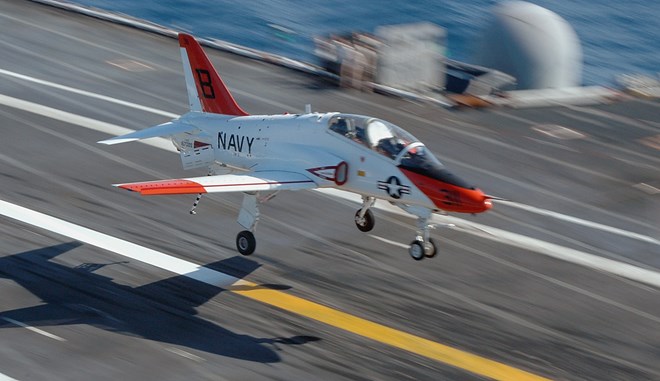 The service wants a two-pilot aircraft with ejection seats. The jet should be able to be flown from either cockpit.

The USN is interested in knowing what aircraft can integrate advanced technologies, such as Precision Landing Mode, which is used to help land the Boeing F-18E/F Super Hornet on aircraft carriers. It also wants the trainer to have an automatic ground collision avoidance system.

The service wants an assessment of how certain aircraft would handle the forces of high sink rate landings, the hallmark of training for landing on the short deck of an aircraft carrier.

The next generation trainer is expected to fly 400h a year. The USN wants to conduct field carrier landing practices at a rate of 1,200 per aircraft per year. It wants each aircraft to perform carrier touch-and-go landings 45 times per year.

The service does not plan to conduct arrested landings or catapult launches from aircraft carriers using the jet trainer. That differs from the T-45, which conducts carrier landings and launches.

Likely competitors in the USN’s next generation trainer program would be the Boeing-Saab T-7A jet, recent winner of the US Air Force’s T-X trainer competition; Lockheed Martin’s T-50A, based on the FA-50, a light attack and trainer aircraft developed with Korea Aerospace Industries; and Leonardo’s T-100, based on the Alenia Aermacchi M-346 Master, a light attack and trainer aircraft.